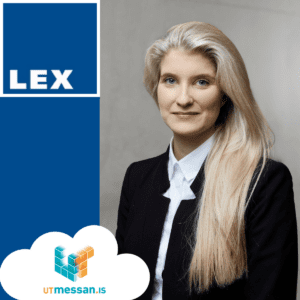 On the 25th of May „UTmessan“ will take place in Grand Hotel, Reykjavik. UTmessan, which is both a conference and an exhibition, is one of the largest IT events in Iceland. The tagline for this year’s conference is “Where Everything Connects”.

During the event, Lára Herborg Ólafsdóttir, attorney and partner at LEX, will deliver a lecture, titled “How to Tame a Dragon? Proposed Regulation on the Use of Artificial Intelligence Within the European Union (AIPR)”.

Most people are familiar with the robot HAL 9000 from Stanley Kubrick’s “2001: A Space Odyssey”, which memorably refused to carry out a human order, stating, “I’m sorry Dave – I’m afraid I can’t do that”. Since the film’s release in 1968, much progress has been made. Furthermore, people have debated the opportunities that the increased use of artificial intelligence brings about, as well as the risks, e.g., the risk of bias and discrimination due to the data used.

This spring, the European Commission published a draft of a new regulation on the use of artificial intelligence within the European Union. The regulation’s purpose is, inter alia, to influence the methods used when companies develop, market and use digital technology in various forms. The proposed rules, and the impact they will have on companies developing artificial intelligence solutions, will be discussed during the lecture.

Moreover, LEX will have a pop-up office at the exhibition where our top IP and technology experts will welcome visitors.