On 12 November 2021 the Court of Appeal rendered a judgment in a lawsuit which was handled by Erla S. Árnadóttir, attorney and partner at LEX.

In the year 2015 the heirs of the artist Jón Kristinsson, Jóndi, filed suit against relatives of Gunnar Backmann who, during the years 1935 – 1957 ran an advertising device, Rafskinna, located in a window of a Reykjavík store, and against a gallery in Reykjavík. The court upheld the conclusion of the district court, ordering the defendants to pay damages to the plaintiffs who now hold the copyrights of Jóndi, whereas the defendants had infringed the copyrights by illegal exploitation of numerous artworks which Jóndi had created for use in the advertising device. The illegal use took place during the years 2013 – 2014 and consisted of illegal public display of the art works, manufacturing of an invitation card and manufacturing and sale of posters, postcards, labels and advertisements which were displayed at bus stops. The total number of infringements was 19 whereas the number of the infringed works was 168. 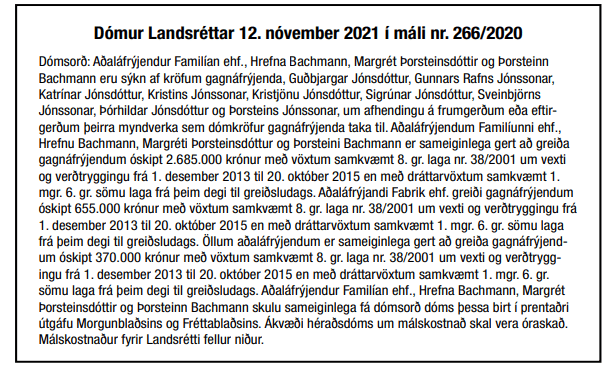